White Balance: The Difference Between Pretty and Dog Pee

You know what’s been driving me CRAZY for nearly 2 years? The pictures I put up of Leyna’s nursery right before she was born. Oh, they were SUCH a white-balance nightmare.

So, knowing a little more about how to fix those problems in Lightroom now (and smacking the old me for not taking the pictures DURING THE DAY WITH NATURAL LIGHT), I was able to go back and doctor them a little bit.

For those of you who have Lightroom 3 (that’s the version I have, so I’m not sure if it’s the same in the other versions… might be), and are wondering how to make your pictures look less yellow or less blue, it’s an easy fix in your “Basic” panel in “Develop” module.

I know it’s still not some sort of photographic masterpiece, and I wouldn’t say the WB is spot on now, because it may be a little purple, but that was hard for me to fix with all the purples naturally in the room. The point is, at least it doesn’t look like a dog peed all over it now.

Why did I not just retake the pictures? Because it’s at that weird transition phase between a nursery and a toddler room and sort of a mess.

I STILL don’t have a baby to put in it, but the nursery is done, and I thought I’d try to occupy myself by doing the grand reveal. Those of you who have been following my progress may remember that I had this crazy ambition to sew just about everything for the room, and I successfully did just that. I’m not saying all the seams are straight or that it was easy, but I’m super happy with the finished product. No way could I have achieved this custom look for what I spent on the fabric (around $200, I believe) without doing it all myself.

View from the door.

I owe a huge thanks to the lovely ladies at City Craft in Dallas for helping me pick the fabrics. They were such a wonderful inspiration and so helpful!

Hot air balloon mobile, a gift from my mom, from Restoration Hardware Baby and Child

Dresser from Ikea
Hutch from Ikea
Bow holder made with this (my) tutorial
Baskets from Target
Changing pad from Target
Trash can is cloth diaper pail (also from Target)
Brown bookshelf purchased at consignment (and yes, I know I’ll eventually have to strap it to the wall or move it when she starts pulling up)

The hutch is decorated with souvenirs from my childhood (like the teddy bear made from my VERY loved baby blanket and my copy of The Secret Garden), along with some things I’ve collected since then (like the Japanese mother and child a BFF sent me when she lived in Okinawa). I also used to collect elephants and have chosen a few to dot throughout the room. I picked up the vintage Winnie the Pooh back in high school, we’ve had the globe forever (it was Scott’s to begin with, I think), and that puzzle box was a gift from my dad when I was in Jr. High. The hippo wooden teether is from Little Alouette. I picked up the giraffe and the nesting suitcases from Gilt.com.

A few friends chipped in and sent me some lovely little additions, as well, like this jolly Buddha statue from Mandy’s shop, Opal.

And Melissa, from Little Yah and Yahees Place, made this coordinating baby blanket based on the fabrics I’ve used.

So there you have it! All prepped and ready. Just missing a BABY now.

If you’d like to see the progression of my nursery planning, check out the following posts:

How I Spent My Kid-Free Staycation

Well, now that took up a good 2 hours of my evening… and didn’t give me a single f-ing contraction. Soooooo I guess blogging doesn’t induce labor. Hmph.

I am 25 weeks pregnant. 25 weeks! I wish I could explain how different my perception of time is this time around. I guess that parenting vortex/worm hole/black hole you get thrown into with your first just never goes away when you get pregnant with the second because I can not wrap my head around how fast this pregnancy seems to be going.

And it terrifies me.

In an effort to maintain some ounce of control over the situation, I think I began nesting the minute I exited the first trimester. Irrational nesting, like, “I WANT ALL THIS CARPET GONE AND I’M NOT COMING HOME WITH THE BABY UNLESS IT’S ERADICATED” nesting.

I actually lost the carpet war. Or, well, I chose to bow out gracefully after coming to the conclusion that I just may have given my husband an ulcer over trying to figure out how to squeeze in (financially and time-wise) putting in hardwood floors between now and Christmas. I laid off after he was convinced he had cancer and wound up going to a series of doctors who basically told him he needed to manage his stress level better.

So I’ve decided to focus my nesting urges on other, more realistic projects, like the nursery. Problem? I have no idea what to do.

With Kendall, we didn’t actually even have a room for him until we moved when he was 8 weeks old, and by then I knew exactly what I wanted. His room came together so much better than I ever imagined and I don’t know how I will ever top it.

I need your help. Please help me come up with a fantastic nursery for baby girl so that I may not lead my husband back into thinking he has cancer again.

Here’s what I’ve got so far:

Colors- I want a PB&J inspired color palette. Something similar to this logo, but maybe less pink and more raspberry and purple.

I’m planning to make the bedding myself, and by bedding, I just mean the bed skirt, the sheets, the curtains, crib rail guards and a pillow for the rocking chair. I’m skipping the bumper this time. I was never comfortable with it in Kendall’s bed and wound up putting a breathable bumper on instead. I may go that route, or I may wind up with something else that’s still in the works. Whatever “bumper” I end up using will be white. Here are some of the fabrics I’m looking at order samples of.

Obviously I wouldn’t be using all of those. I’m thinking one of the mainly purple options, one of the brown options and the light brown minky dot.

The furniture we have (crib and rocking chair) is being passed down with the exception of the dresser. It’s all espresso/dark brown.

I’m pretty sure we’re going to end up with this Ikea dresser, but I don’t know if I should keep it espresso and add white knobs to it, or if I should go with white to break up the matchy, matchy vibe a bit.

Oh, and I get to add this charming book case that I got at a consignment sale to the mix, too.

Those are pretty much all the solid ideas I’ve got. I think maybe I like this chipboard chandelier for a mobile, but I could be convinced otherwise. Was also thinking maybe a cutesy, mod-ish hot air balloon one, but that’s mainly in my head as I’ve yet to run across anything that resembles my idea. She will have a new ceiling fan, but it will be a neutral one, not anything theme-y.

We have room for a mural on one wall, and I have an amazingly talented sister in law who could do one for us (she painted the solar system on Kendall’s wall and it is phenomenal), but I don’t want to paint a mural just for the sake of painting one.

I love this inspiration board from OdietAmo.blogspot.com and the ideas she has for a purple and brown, sophisticated nursery, but it’s a tad too much white for my liking. 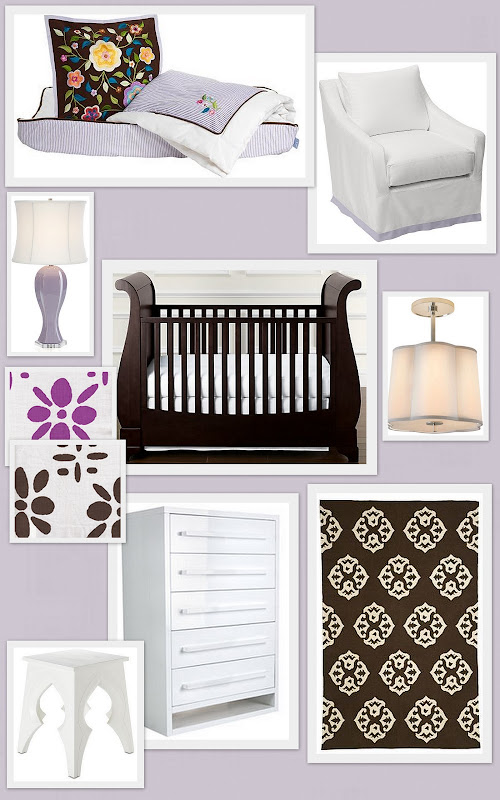 I also like the idea of adding a bit of a “round the world” influence. You’ll notice that one of the fabric choices I’m considering has little Russian dolls on it, and I think the hot air balloon mobile would be cute to add to that. Was also thinking we could do a cool world map mural if we went with the mural.

Okay…  soooo have I completely flooded your senses? Are you too far gone to help me? Am I headed in a million different ways at once? Because that’s exactly how I feel.