When we bought this house, our very first house, Kendall was 8 weeks old. Let’s just say I still had a pretty warped idea of what life with kids… like, REAL kids, not just the ones I imagined I’d have… would be like.

Pretty much all I need to tell you is I used to think I’d turn the “formal” rooms of this house into, umm, actual FORMAL rooms. Like, I thought I’d buy a bar cart and keep wine glasses in there. And there would be no toys. Oh no. No toys in the formal rooms. That’s not very formal at all. They would be “adult only” spaces.

The good news is we couldn’t afford to do anything with those rooms until Kendall was well into toddlerhood, at which point I was utterly defeated and just threw a train table and, yes, a crap load of toys up there.

You can read more about the evolution of our formal rooms here.

*Sigh* I would never have beautiful design as long as I had children, I once thought. Kids ruin everything, especially beautiful houses.

And that was just as well because we couldn’t really afford to do everything we wanted back then. Our budget was tight when we moved in, having gone to a single income so I could stay home.  I used to dream of suddenly coming into $10,000, and using every penny to fully decorate the house, throwing every last piece of frat-house furniture on the curb.

I remember Nate Berkus said on his show (oh, RIP Nate Berkus Show, I miss you so) something to the effect that decorating your house should be a journey, and it should represent your journey through life. That you shouldn’t rush out to do everything at once, and instead let it unfold as your life does.

Pfft. That sounded like an awful idea. What fun is that, NATE?

And yet, not really by choice, that’s what we’ve done in the 6 years we’ve been in this house. One day I’ll have to do a real house-tour, and bust out the pictures of this place on the sales flyer. The difference is crazy.

This house? This is OUR home. It has our stamp all over it. And it is not at all the home I would have designed if someone handed me $10,000 the day we moved in.

It’s much, much better.

That formal space is now a home office in one room and a playroom in the other. In the office, we have a small table for the kids to play Legos at. In the playroom (above) we have nice seating for Scott and I to sip coffee in while the kids play.

Every room in this house is for every person who lives in this house. We’ve changed it, and added to it, and repainted, and remodeled it slowly, and in a way that makes each space as functional for our whole family as possible.

Items like this shelf Birch Lane sent to me are filled with the sentimental (pictures) and the functional (like a bin of sunscreen and bug spray). I even found an aesthetically pleasing way to contain the billions of balls that roll around this house and their accompanying bats and helmets.

Had we designed and decorated this space all at once, instead of letting it evolve with our family, we would have overlooked details like the importance of a table that is easy to clean, and doubles as a craft space. And Scott would have never had time to build one that I love more than anything I’ve ever seen for sale.

We also happen to have a tutorial on how to build a farm-style table yourself here.

Now that I have a grasp of designing not just around kids, but inclusive of the kids, I feel far less defeated. Actually, I think I’m more excited about (gradual) home design than ever.

My kids may ruin a lot of things, like my ability to ever wear anything white, but they definitely have not ruined our ability to have a beautiful house. Yes, when people walk in our house, the first thing they will probably think is, “Kids live here.”

Because, you know, kids live here.

At long last, we finally have some instructions on how to create one yourself! Unlike the Barn Door Track, this project could probably be finished by a beginner, or at least someone who has used these tools on smaller projects a time or two.

The base of the table was inspired by this tutorial on The Art Of Manliness, but we modified it to give us enough space to seat one person at each end of the table. We also opted not to paint the bolts because we liked the look of the exposed hardware.

Tools and materials for the table base:

The diagram below will give you a visual of how to cut the wood and put it all together (click on it to see it larger). For more specific instructions on how to piece the base together and cut the notches, please refer to the original tutorial on The Art of Manliness. 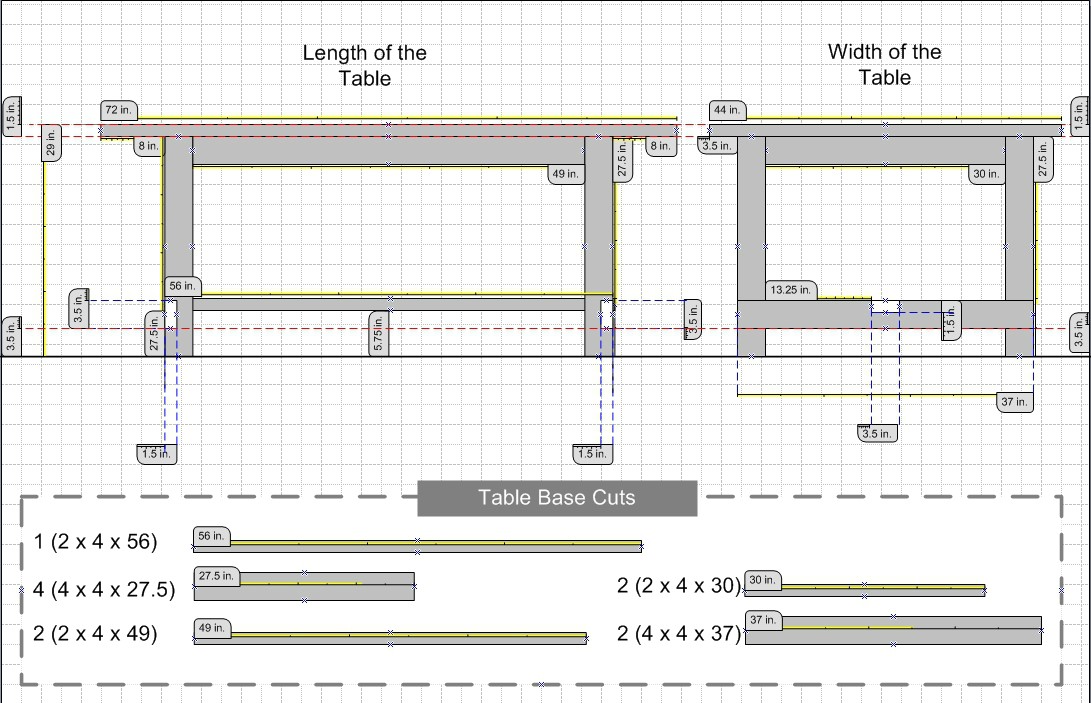 The top of the table is made from leftover hardwood flooring pieces (from the floor we installed last year).

Click through if you’re on my homepage to see the 2nd half of the tutorial.

I gave our kitchen table to my little brother and his wife last weekend. Never mind that we didn’t have one to replace it. I knew it was the kick in the pants Scott needed to get busy building us a new one. (You may recall seeing our terribly worn old oak table in lots of the pictures I’ve posted on here. I think my brother and sister in law have grand plans of painting it… after a very thorough removing of all the crusted on food from the children.)

Not that that guy isn’t doing enough these days. What can I say? I’m a…. demanding wife. BUT I know he loves this kind of stuff, too, and we’ve been talking about building a new kitchen table out of the leftover pieces of wood from our new floors he installed last year forever.

So he started yesterday…

And hopefully we’ll have something to eat off of by Monday.

We (and by we, I always mean he) are not building the chairs, though. In fact, even if he could build them, I’m not sure I’d like the matchy matchy look. Instead, I’m 90% sure I’m ordering these:

And hopefully we’ll end up with something a little similar to this:

I’ll let you all know how it turns out soon! Ideally, we’ll have the chairs by the end of next week because what good is a table if we can’t sit at it? I mean, other than the obvious shit collector for all the things nobody actually wants to put away when they get home.

What are you up to this weekend? Any fun home projects?

Hope it’s a great one, and Happy Cinco de Mayo!