Toddlers Are The Harshest Food Critics

Honesty is the key to any relationship and we always want our kids to feel like they can tell us anything… right?

But really, toddlers take this concept to a whole new level. Especially when they turn into tiny food critics. (And we’re definitely impressing the Zagat people.)

“Sure mom, the mac and cheese was swell, but I’ll have what the cat’s having.”

Next time, just serve up those noodles in a cat dish and call it a day. (Does that count as a parenting hack?)

Thank you to mom Sara (instagram.com/sarajegeorge) for letting us share this adorable video.

@mommyluvscoffee@howtobeadad She’s this cute because she’s THAT challenging. It’s all a direct correlation. Mother nature, FTW.

It’s a theory I’ve long since held: The cuter the toddler, the more challenging the toddler. I even made this handy chart to explain it visually when Kendall was 2. 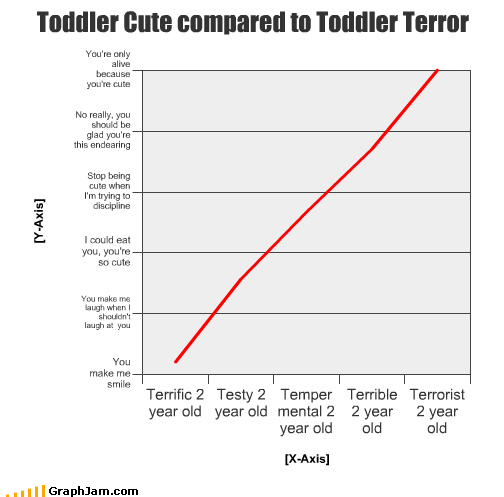 Leyna is INSANELY CUTE, if I do say so myself. Here’s some evidence in the form of a short video in which she says hi, bye, gives me kisses, and squeals like a 12 year old at a Bieber concert.

Holy crap, how scary do I look there?! Sorta like a Synchronized Swimmer.

So obviously you can tell that she is also OMG so challenging.

Let’s break to discuss how HORRIBLE my phone pics are because I’m STILL using a 3GS with a mysterious black scratch (?) on the lens. COME ON NEW IPHONE ANNOUNCEMENT. But if you want to play “find the black scratch!” you can always follow me on Instagram.

That picture was taken in the midst of a meltdown that followed her standing in front of the refrigerator, pounding the door, shouting, “HAND! HAND!! I WAN DAT!” Because I am mother of the year and sometimes bribe my kids with clouds of Reddi-wip sprayed into the palm of their hands. I told her no, not because I was above giving her some for breakfast, but because I’d already filled her chubby little palm with whipped cream once before 10 a.m.

The tantrum lasted at least 5 minutes. She probably burned off all the calories and sugar from the whipped cream, so at least there’s that.