Beef, it’s what for dinner.

And lunch, and even breakfast.

It started about a week ago, a friend posted a picture of a steak on her Facebook status. I was drawn to it, salivating, suddenly finding myself drawn in by food rather than repulsed by it. It was fleeting, though, as I haven’t been much of a steak eater lately. But I sat there, flipping through the channels, and ran across the PFPW Channel (Porn For Pregnant Women), also known as The Food Network. That Sonic the Hedgehog looking guy was making BBQ brisket. The way he poured the sauce on it, the way it dribbled through all the cracks of the meat, the way the bun soaked it up, I was ENTRANCED. It was 10 pm and I NEEDED a BBQ brisket sandwich.

I didn’t get my fix until the next day when, exhausted and wondering what the hell I was thinking deciding to go to the zoo when it was 95 out, we walked into a cafe near the lion exhibit. I nearly crawled over the people in front of us in line when I saw they had BBQ beef brisket sandwiches on the menu. It was, like, the best sandwich of my life. I did not share one single crumb. I threw fries at my child to keep him at bay.

Over the next 48 hours I consumed 3 more BBQ beef brisket sandwiches, each as heavenly as the last. As I type this, I want nothing more than another BBQ brisket sandwich.

Tonight, I was craving straight up bovine. Yeah, you buddy.

You are not cute, you are delicious.

I wanted a fat hunk of red meat. It’s all I could think about. We attended a lovely little birthday party today, complete with delicious cupcakes which I wanted nothing to do with because they were not bleeding and did not, at any point in their previous life, moo.

It was a Code Red Alert on the way home. We pulled off at Outback Steakhouse, where I indulged in a fantastic medium steak, like this… 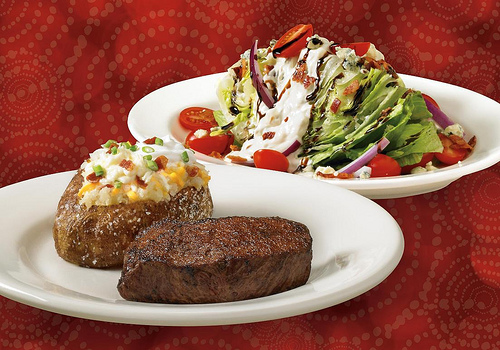 It’s uncontrollable. I’m unstoppable. There is not a walking piece of beef safe from the desires of my fetus. And let me tell you, the fetus does not care if the cow was a happy cow, if the cow was fed organically, if the cow fell asleep on a lush bed of hay. The fetus laughs at my attempts to “eat local” and “reduce meat consumption.” The fetus WANTS BEEF NOW.

I’m 12.5 weeks pregnant, and OMG, this post is making me hungry… again.

The Heart of Life is Good

My Tips For Preparing For Your 4th Trimester

This Halloween-Inspired Maternity Shoot Is Stunning

Your Baby Registry Doesn’t Have To Be So...

The First Thing You Eat After Giving Birth...

The Power And Beauty Of Surrogacy

You Don’t Have To Invite Anyone To Your...

Well now I want a BBQ beef brisket sandwich and I am definitely not knocked up. Also that cow is decidedly delicious looking and not at all cute. And furthermore to this day Piper only eats NON organic/free range chicken. It’s as if she enjoys the taste of antibiotics. It’s infuriating.

I have read your blog for quite a while now, but never commented. I have a 2-year-old girl. Let me just say I always laugh my ass off when reading your excellent (and so very true!) accounts of being pregnant & raising a toddler. Thanks for letting us all now we are not alone out there!!!!!

Thanks for reading and coming out of lurkdom! So glad you like it 🙂

This post was DELICIOUS. I was craving WingStop earlier this evening. I have never wanted wings in my life. I really hate them. So I guess you don’t have to be pregnant to have stupid weird cravings.

I was the exact same way while pregnant with my son, even though I was a vegetarian! It’s amazing what cravings can make you eat.

Now he’s 13 months and will eat as much meat as he can get his hands on. I wonder if they’re connected.

You know, I couldn’t get enough fruit when I was pregnant with Kendall, and now the kid puts away the whole produce section. He loves to eat all the things I craved with him.

I have a super easy crockpot recipe for pulled pork sandwiches… which is just as good as the beef ones you’ve been drooling over!

1 pork butt/shoulder
1 can chicken broth
1 bottle sweet baby rays or other bbq sauce
any kind of bun, bread, or tortilla

Place pork and chicken broth in crock pot- set on low for 6 hours. Once done, shred and drain- remove bone if necessary. Pour and stir almost entire bottle of sauce over meat. Continue to warm for another 30 minutes…. enjoy on a warm bun! yum!!

Be glad you don’t have my job. I work in beef sales at a major protein producer…lol.

as an add on to Tara’s pulled pork recipe up there- you can also substitute the chicken brother for a can of Root Beer. Dont know why or how- but it is DIVINE. The rest of the directions are exactly the same.

my fave sauce? Claim Jumpers. I love the restaurant and I just plain ADORE their bbq sauce. our Albertsons carries it. yum.

I craved tomatoes when I was pregnant with my first. I always hated tomatoes, wouldn’t eat them at all. Now she loves them, and I find that I tolerate tomatoes much more now. I just found out that I’m PG with my second….so I think I’ll be following your posts much more consistently now. You’re hysterical!

My H is a master meat smoker. If you’re going to do the pork shoulder in the crock pot, rub it first.

Mix all of that together. Rub it on the meat. Let it sit for an hour and crock pot away!

I’m also a fan of cutting the fat cap off the pork shoulder before cooking because I can’t stand to get a mouthful of fat in my sandwich. The H also says that because of the internal fat in the shoulder, you can skip the chicken broth and moisten it after you shred it if you need to, and then use apple juice.

Also, I just told the H that you’ve had pregnancy induced cravings for BBQ and he goes “How come I didn’t get that model?”

We use a can of cola instead of the chicken broth for the crock pot recipe. and my fave is Famous Dave’s sauces 🙂
Ground beef was about all I could eat when I was pg with DS, but he won’t touch it now.

I can totally relate! Once my 12 weeks of nausea were over, I wanted cheeseburgers all the time. If I saw a McDonald’s commercial, it was over. My husband was on his way out the door to his up the drivethru!

I swear our pregnancies are identical…every time you blog or Tweet about a craving or issue, it’s likely I’m having the same. Red meat has been my BFF since the beginning of this! Red meat, and mayo. Sometimes together. Sometimes not.

This might be a funny post to comment on your writing style, but really your writing is just great, Jill. I read this post to my husband, and we both laughed our way through it. We wish you many BBQ beef brisket sandwiches!

You should have told me! I totally would have made you a beef cupcake! lol

Really? That looks good to you? Interesting, different people’s taste in foods. I think it looks horrendous. But in all fairness my husband thinks some of my vegetarian dishes look like vomit so there you go.
(I can appreciate the smell of meat but wouldn’t touch it with a ten foot poll)

This made me laugh out loud! The only thing that ever made me throw up during my first trimester (besides brushing my teeth) was when I tried to prepare raw beef. I could. not. do. it.

But the reason I was trying to cook them was because it was all that I craved. Five Guys, the local drive-in and dare I say McDonalds were my favorite places to eat because I could get delicious non-local burgers…and as long as someone else was cooking…all I wanted was a big steak!

Now? I’m hungry and I want a burger again 🙂

hah. i remember pregnancy really bringing out the voracious carnivore in me too. mmmmm beef.

I love your comments with the pic of the cow!
I never ate red meat before I was pg, but craved it and ate it all through my pregnancy.
After reading this, I’m thinking about stopping off at Colters for dinner and grabbing something meaty and yummy.

I just went to the grocery store and bought pork to make pulled pork!!

I’m 23 weeks pregnant and beef is my worst craving! It started about the same time as you and I can not tell you how many steaks, cheeseburgers, and hunks of beef I’ve consumed. It is ridiculous.

I hear ya. I craved meat at the beginning of this pregnancy (I am 33 weeks now). Thankfully it calmed down a little. Pre-pregnancy I never craved meat. I wanted RIBS from Texas Roadhouse and O’Charley’s YUM! I could not get them off my mind. Now I crave peanut butter and jelly toast and cold cereal…weird. Enjoy the beef!