It took me 13 years to get a trampoline, this kid gets one in 2.

Well, it’s official. I have a two year old. We celebrated Kendall’s birthday in grand fashion this weekend, including a bounce party and a house full of family. It ended in 1/3 of my tiny backyard being taken over by the most grossly humongous trampoline you’ve ever seen. Let’s just say I started out wanting a “toddler” trampoline like this one-

But ended up with something like this once my 32 going on 12 husband had his way. 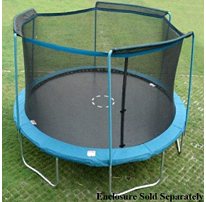 All I can say is how the hell did I ever survive growing up with the death trap that was our trampoline? Net enclosures were nonexistent and we couldn’t even get that spring cover pad to stay on.  It was just a bouncy, rusty, circle of death, especially when we would throw the sprinkler underneath, load 6 kids on top in bathing suits and squirt Dawn dish soap all over it. How did I survive the CIRCLE OF DEATH?

Moving on… I will do a full birthday party post tomorrow, complete with pictures from the party in which 99% Kendall has his finger crammed up his nose. He is so *that* kid right now. And I don’t even fight with him about it anymore because anytime I tell him to not do something that’s “gross” or “icky” he thinks it’s that much cooler and just does it more, shoves his finger up there farther, digs things out for me, shows them to me while laughing and cackling “gross!” over and over.

I was looking through his pictures on my computer tonight because that’s where they all live… on my computer… not in a proper album like they should, like I promised I would make by the time he turned 2. Anyway, I figured I’d share some of them that I’m fairly certain I’ve never posted on here before because this is my “mommy blog” and I thought for once I’d try to act like a real “mommy blogger” and ooh and ahh over my sweet boy and how big he’s become.

Hooked up and ready to go... nowhere.

Kendall is 2 years old, and has officially started repeating everything I say. Tonight it was, “butt,” as in, “come here and let me wipe your butt, there’s still poop on it!”

Saying Goodbye To The Mom I Needed To...

Nothing Prepared Me For My 2 Year Old’s...

I’ll Never Apologize For These Selfies

I Can’t Be Bothered To Care About A...

The Sunscreen Struggle Is Real

I Am Breastfeeding My Toddler Around The Country

Save Big At Build-A-Bear With NO LINES!

Ok, so you are pretty much gorgeous. That picture on your sidebar does not do you justice!

Oh, and of course you son is adorable!

Happy Birthday, K!! I hope that he enjoyed his party and that trampoline is fucking huge! We had one growing up and it had a pad but it moved if you fell on it so you’d end up getting pinched anyway.

glad to know Im not the only one who managed to survive the “circle of death” complete with sprinklers and WAY too many kids on it!

Yes, suprisingly we survived the circle of death as well…guess that means we don’t need the net enclosure, right? 😉

My photos live in albums now, thanks to hotprints.com. If you sign up with them, you get 12 free photobooks- one per month for a year. They aren’t the best, but at least I can show people without them having to sit in my office. 🙂

Oh how sweet!! But the fact that he is officially two sort of makes me want to cry. My (middle) baby will be two in August and I cannot believe it is that time already. Where did two years go? How did it happen so fast? And it does seem SOOOOO fast (okay, well except that not going on a date in that amount of time – that seems LONG!!!!). 🙂

Seriously. After having a kid you step into a time warp. That’s the only way I can describe it.

Ah! We have the same Exersaucer!

Dude, like, 10 minutes ago Jonas was turning two. Now Julesy is turning two, and I just do NOT understand how that happened???? It seems like someone’s Punk’ing me.

Though, Jonas seemed sooo much older at two than Julesy does, even though Julesy is talking 100 times more at this age than Jonas was. I think the baby just always seems like the baby. As soon as you have another kid, the older one ages by years overnight.

Yes, they must! It’s crazy that they are so close in age. Happy 2nd year to Julesy, too.

happy big TWO to Kendall! NO FAIR i want a circle of death! i never got one :[ had to go attempt to fling myself off of other peoples death traps.

those pics of him make my parts twinge for number 2.

ok, that sounds like i have to take a shit.

no, it makes my ovaries twinge for a second baby. that’s better.

Gah, I remember that exersaucer photo! The little baby leg chunk is unmatched. Love it!

Happy 2nd Kendall! What a cutie, and how much fun will he (and dad) have on that trampoline? Those pix of him are super cute, and do make even my over used ovaries ache 🙂

I remember frantically stalking BOTB for updates on whether BabyDonkey was here yet. I can’t believe it’s already been two years!

Where DOES the time go!?

I just can’t believe it. Such a cutie. Happy Birthday Kendall!! I bet he loves his trampoline.

I just have a small blog, but I wanted to honor you as part of my celebratory mommy bloggers 🙂

“Circle of Death” sounds pretty accurate for the trampoline I used to jump on, too. I loved looking at the photos. My little guy is 6 months, and I feel like it has been about 5 minutes.

That thing is awesome!! We need one for our backyard! Happy Birthday, little guy!! Two is a big year! Way to go, mama!

these pics are so cute…my lil man is 6 months and it feels like its only been a minute. I cant imagine him being two but i know its gonna go by so fast. *sigh* cant we keep them little forever?

[…]  him and a multitude of toddlers and exhausted parents for his party (and you can see why the huge ass trampoline seemed like a good idea at the time, too). Screw the park this year. The park is too much freaking […]

Thanks for the photo montage, it’s fun to see how much he’s grown. Mind boggling how much they change and how fast it goes.

Trampolines still scare the crap out of me. I was convinced that I Was going to be “that kid” who fell on the rusted pointy exposed cables and decapitated herself. That said, I would totally let P bounce in one of those new ones, they look safer than her crib!

I was *just* thinking about picking one of these up. But didn’t. But now I might. Damn…there goes another couple hundred bucks!

Hey, do you happen to remember the name/brand of the toddler trampoline in your first picture? I’m trying to figure it out so I can promote it on my site–baby trampoline I’m not sure if its an older style or not but I can’t seem to find it anywhere and it seems like one of the best.

Great pictures! Ha ha, that’s really funny about how it suddenly changed from a plan to buy a toddler trampoline to a ginormous one that’s taking over your yard – funny how those things happen once the hubbies get involved in the decision-making process!